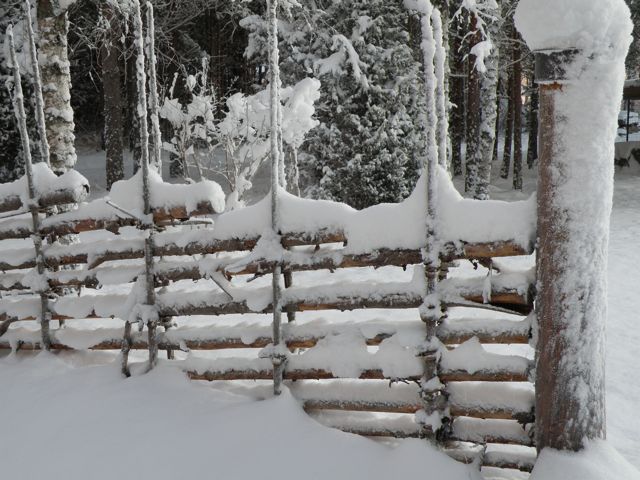 Low level activity here on this blog. Which is not to say I haven’t been thinking about bokashi, about compost, about soil, seeds, plants and… SPRING! Not many minutes pass in a straight line without green-coloured thoughts passing through my mind. We’ve seen nothing but white now since early December. It’s like a Christmas card the whole thing, but we’ve had a lot of temps below -20 and it gets to you a bit. In the end.

On the plus side: I work at home (as a freelance translator). Fire going, cat n dog snoozing, customers out of reach at the other end of an internet connection. Quite idyllic actually. And still just a few minutes into town to fix the civilised stuff. Most of my workload is in the autumn and winter which is just perfect from a “microfarming” perspective. No way do I want to be stuck at my desk all day when the sun is shining and the world is green.

On the Bokashi front: As you can imagine it’s a bit of a challenge finding ways to deal with all the ready-fermented Bokashi buckets under these conditions. Just now I’m running a series of little soil factories in a heated workshop. Big plastic storage boxes (75l I think) with layers of cheap potting mix and Bokashi. Jammed up against the heater… They’re stacked under a longggg trestle table (5m) where I’ve set up planting trays and grow lights. I collect plastic sweet boxes (3l) from the local supermarket and these are ideal as seedling boxes, just drill a few holes in the bottom. With the plastic lids on an angle they make great mini glasshouses, the lids can then be used under as drip trays.

I usually start up the “season” on Valentines Day, it feels good to do something useful with such a silly day. Tomatoes and some of the extra slow stuff. This year I’m trying to plant a lot of herbs, the seeds are all on their way and I thought I’d give it a try to start them up now, the perennials at least.

The challenge is that things get incredibly crowded inside if you don’t watch out. It’s all too easy to overdo it and end up with stuff coming out your ears and nowhere to put it. I should be able to open the greenhouse mid-April for some of the hardy stuff and in May some of the non-frost things can go into the ground. But we’re not over our frost limit until school breakup, first week of June. Hence the logistics dilemnas!

But believe me, things grow as hell anyhow with round-the-clock sun. And that’s where all the Bokashi efforts come into play as well, the better the soil the better it all goes. When you get a turbo start to the planting season like we do, soil is all the more important. In my humble opinion.

So that’s why I’m working hard with buckets and boxes and heaters and lamps. To be honest I think it’s a lot of fun and a great contrast to sitting behind a computer, soil therapy if you will.

An important part of it is also testing out how we can do stuff here in these cold places. I get a bit of mail from places like Alaska and Canada, they share our dilemna and understand all the reasons why you have to be resourceful. In NZ where I grew up its easy: you just stick the stuff in the soil and there’s no need to innovate. (Luxury!?)

Part of my test mission here is also to see how we can do mini-recycling projects on a local basis. I’ve decided to put embarassment behind me and now have some regular suppliers of “stuff I need” in town. The pizzeria (mayonnaise buckets for Bokashi), the supermarket (for sweets boxes), the coffee shop (for buckets filled with the week’s coffee grounds) and a couple of offices (for their lunchroom food scraps). So I tootle around and fill the car and you know what — I get a smile and welcome in each and every place. Noone thinks its a bit silly. Surprising, isn’t it?

Best of all is that the plants are going to just love the soil we’re brewing up there in the shed. Can’t wait to open the first seed packets and get it all going.

Snow storm or no snow storm.

2 thoughts on “Yet another snowstorm… spring seems far off”