Tim the dog…and his Bokashi diet 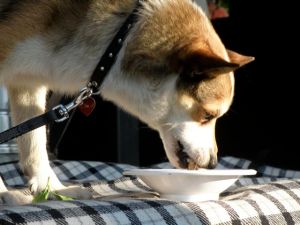 This is our dog Tim. He’s a Norwegian Lundehund, almost five years old now. Full of beans and a truly lovable character. Lundehunds are a breed under rescue, some 50 years ago there were only a handful left on earth, huddled on a stormy island in the Lofoten archipelago on the far NW coast of Norway. They’re as close as you can get to a primitive dog, still much as they were hundreds (thousands?) of years ago. Smart, lovable, slow as anything to housetrain. Six toes for hanging onto the precipitous stormy cliffs of Lofoten when they were climbing in and out of holes looking for puffins — these were true work dogs well into the last century. A family could own ten or more, each worth as much as a cow (a lot in other words, if you think back on the tough life in Northern Norway in those days) and they were sent out to bring home puffins. A huge source of income (puffin feathers) and meat (which was salted down for the winter).

ANYHOW. The thing is with Tim that he is healthy as anything. He bounces around here where we live in the country with no cars to worry about and thinks all animals are his friends (we have deer and moose passing by regularly, tons of geese, cranes and a lot more we never see). And he’s been eating Bokashi for some time now.

Not a lot, just a sprinkle on his food each day. He has nothing against it, just woofs it down with the rest of his dinner. We can’t prove that it makes him healthier, but it certainly does him no harm. (All the bacteria in Bokashi are approved by the FDA because they exist readily in nature anyhow.)

We all know by now how important it is with probiotics — I don’t know how it is where you are, but here the TV is full of ads telling us how we need probiotic bacteria in our yoghurt, in our butter, in our you-name-it. Soon it will be in our toothpaste. But why not? We humans go round with a couple of kilograms of bacteria in our guts — a couple of kilos! That’s how all the work gets done down there. Get some bad ones in the mix and we all know what trouble we can expect. The usual solution then is of course antibiotics. Anti. Biotics. Anti. Life. Antibiotics kill off all bacteria, the good along with the bad, and our gut is left in limbo.

And that’s why we add Bokashi bacteria to our dog’s food. These are age old bacteria that work in harmony with the other age old bacteria in the digestive system. Keeping our number one dog nice and healthy and full of mischief. The way we like it!

PS Read more on the various EM sites (the NZ one is good) about the use of Bokashi and EM in general with pets, horses and livestock. This is a growing movement, with documented health benefits. Very interesting to look into if you’re interested.

PPS You might wonder why we don’t eat it ourselves if we feed it to our dog. Actually it works fine (great baked into bread), but there are many complex rules and regulations around what one is and isn’t allowed to say and this is not something that can be officially discussed. But obviously we wouldn’t feed anything to our dog we wouldn’t be prepared to eat ourselves.