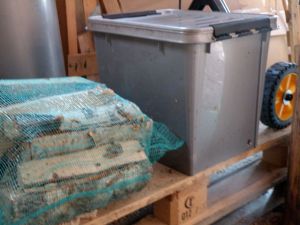 It doesn’t look like much and it isn’t. A plastic storage box from the local department store. It is however airtight. And it is packed full with Bokashi compost.

70 litres in fact. Which is the contents of the last four Bokashi bins we’ve filled in the kitchen (they compact a bit over time).

It will be heavy as hell to lift when spring comes and I have to get it over to the veggie patch. But I’ll worry about that then! Just now I’m so pleased to have so much good stuff on stock, it will be a flying start for the soil when the great day comes to get out there and start up the garden for the spring.

Two key things to keep in mind: moisture and air. Bokashi is really very forgiving but it hates to be damp and it hates air. So your winter storage box has to be truly airtight.

The dampness thing is easily fixed: by the time your Bokashi bucket has finished fermenting indoors most of the liquid has been drained off. Check all the liquid is out first before you put it into storage. Then use newspapers to take up any excess. I usually put a couple of papers on the bottom of the storage box and a newspaper after each bin of Bokashi is emptied in. The paper will ferment too in due course and can also go into the garden.

After you’ve laid a newspaper on top it’s worth just giving the whole thing a good squash down. Squeezes out a fair bit of air and the paper means it’s not in the least icky or sticky.

Next time you’re in adding a layer see how things look there in your treasure chest. Add more paper if it seems a bit damp. A couple of handfuls of extra bokashi if there’s any hint that it may need an extra boost (usually doesn’t though). White mould is always ok, a good sign. If you’ve got any other problems (smell, green/black mould) then it’s gone wrong. Too much air or too much humidity. Sorry — it’s just to toss it and start again.

So the only thing that’s really of any concern is how to lift up the 70 litre box onto the wheelbarrow when the time comes. But that’s a luxury problem in the great scheme of things!

Everything else is easy!

4 thoughts on “Saving Bokashi for the spring”