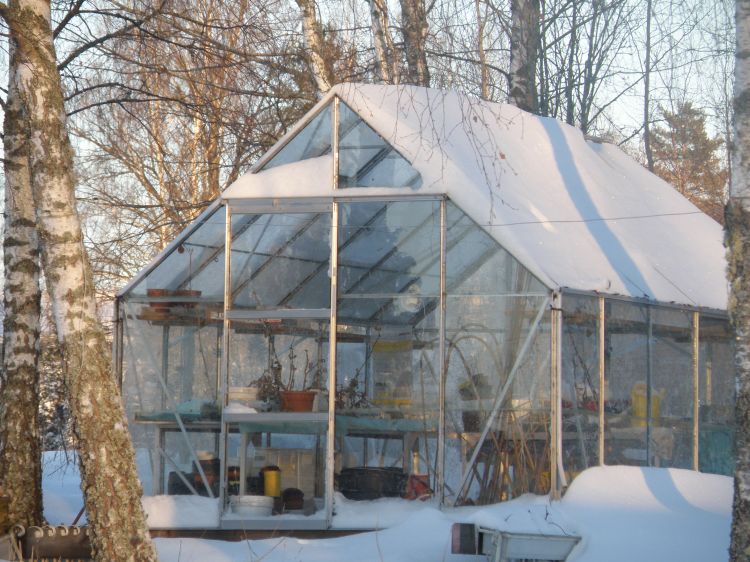 I have to admit it resists a bit. It doesn’t come naturally to be running round in the garden with compost buckets when it’s -24 out. Tomorrow is another day. Maybe it’ll be warmer then?

So I thought I’d write a bit about how we fix it here in the getting-more-arctic-by-the-minute backwoods of Sweden. Having grown up in it, I’m fully aware of the fact that there is another hemisphere. One that is warm. That has summer now. One that people actually do things like take off their clothes and go swimming.

The thing is, it’s just a bit hard to believe.

So this is how I’m planning to tackle the compost thing this winter:

1. Glasshouse. Great storage space when there’s nothing going on. And come spring a warm place for soil production. I’ve lined up a number of sacks, bags and bins in the glasshouse, some already filled with autumn leaves and/or leftover soil from last summer. I’ll empty the occasional Bokashi bucket into them and leave nature to do it’s work. (They don’t need to be airtight, but if I have a lid or a string to tie the bag I do that.)

2. Indoor soil factory. This is a great way of producing some soil for late winter planting — tomatoes, seedlings that need replanting, potplants that are due for fresh soil. The sort of thing you do as indoors as possible, at least here. Basically it’s a big plastic bin with a lid, layer potting mix and Bokashi as you see fit (maybe 50:50) and put in the warmest spot you have. I jam mine up by a radiator, I have a friend who has hers on the heated floor in her (very nice!) spa-bathroom.

3. The trusty old hot compost. It’s good to get the odd bucket in here to keep things going, to some extent at least. If your compost bin is full from the autumn’s garden clean-up this is a good way to give it a kick start. (OK, I admit you can’t kick start anything at minus-twenty-whatever, but the principle holds.) I usually carry out a bag of paper scrap from the kitchen to tip over the Bokashi, it’s a nice easy way of fixing the carbon-nitrogen thing even in mid-winter when you don’t have anything else to use. 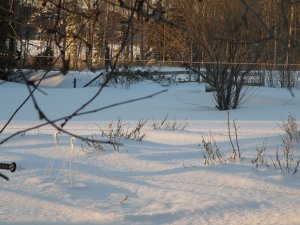 4. I do most of my growing these days in long raised beds. (The picture above shows how they look at the moment, not much to see under the snow.) So if it’s not all too hard I’ll add a bucket or two into the beds now and then, tucked in under the cover of leaves and hay I added in the autumn.

5. Then there’s the experiments: I have a couple of big outdoor clay planters I’m testing with Bokashi. Plonked them down in a garden bed and filled with a couple of buckets of Bokashi. Topped up with leaves. And a sheet of plywood to keep the dog out. It’s one big frozen clump just now, but I would expect it to be a thriving worm farm come spring.

Another experiment is an old metal-grid rubbish bag holder I found in the shed. I plonked that down in the rhubarb patch for the winter. Into that I’m putting paper sacs filled with Bokashi. I’ve also been tossing in some leaves (when they were still accessible). The grid is rat-proof and my idea with the paper sacks is that they would keep the flies off long enough for the Bokashi to turn to soil. Obviously all rather theoretical under the circumstances but worth a try anyhow.

6. Then of course it’s possible just to put the buckets out in the wood shed and let them freeze. I have a lot of buckets so that would be no problem, and if the winter goes on long enough and I get fed up enough I may do just that.

So, that’s my plan. What’s yours? Or are you just lucky enough you don’t need to resort to these desperate measures? Although whichever way you look at it, it’s good to have options. There’s many ways of making soil and the cool thing is I’m pretty sure we can all do it, regardless of which end of the planet we live on.