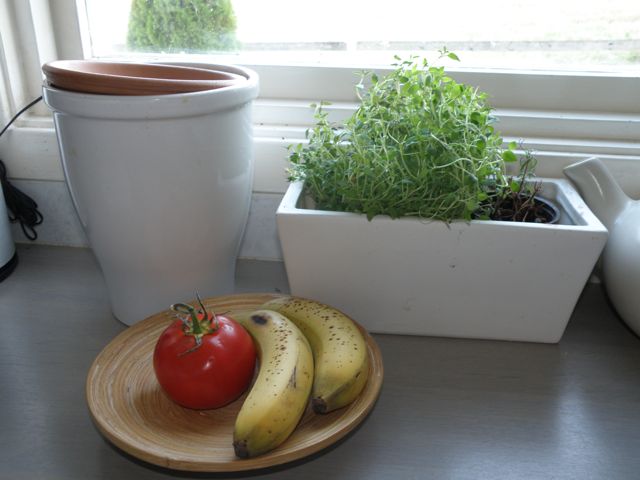 What you’re really doing when you bring a Bokashi bucket into your kitchen is swapping one rubbish bin with another. ALL your food waste will go into the Bokashi bin and by the time you recycle everything else (you know, glass, plastic, metal, paper, all those damn batteries and light bulbs…) there’s more or less nothing else. So you can pop in a micro bin, a couple of litres or so, under your bench alongside the Bokashi bin and toss the old rubbish bin. Well hang on, we don’t just toss things any more, right? So recycle it into some sort of container for uh, recycling paper or something.

Anyhow, unlike your old toss-it-all-in rubbish bin that was always ready to receive, your shiny new Bokashi bin doesn’t like to be opened more than once or twice a day (microbes really HATE air). So the trick is to collect your scraps somewhere handy until it’s the daily Bokashi Hour. (Well, I’m joking, it doesn’t need to be the same hour every day.)

We use a flowerpot for this, the kind that doesn’t have a hole. It’s the white shiny thing in the picture. And we’ve plopped a standard terracotta pot saucer on top which keeps it vaguely airtight and keeps any visiting fruit flies out. This works perfectly, and actually I wish I’d done this years ago, even with the old rubbish bin system.

It’s much easier to throw an apple core or tea bag into the benchtop caddy than to open the cupboard door under the bench while trying not to get the cupboard door knob too icky and sticky while you’re at it.  A lot of bending and scraping during the course of an average day that, when you stop and think about it, really isn’t necessary. If this was the industry world we could do a productivity study on it and probably find out there’s time and money to save on having a mini-bin at hand for all the small stuff. Especially handy when you’re doing the vegies for dinner to be able to just scrape everything direct into the little Bokashi bin.

And let’s face it, what we throw more than anything during the course of an average day is bits of food — apple cores, potato peelings, a bit of smelly sausage from the fridge, leftover lunch sandwiches… You’d be surprised how it mounts up during the day and we always have one or two full pots that are transferred to the Bokashi bin during the day.

Which is a quick and easy job in itself — just lift off the lid of the Bokashi bin and toss in the contents of your benchtop caddy. You can give it all a bit of a push down with the pot while you’re at it, it’s not necessary to fuss and bother too much over chopping up your food scraps but it is worth compacting the contents of the bin a bit while you’re there anyway. Sprinkle over a handful of Bokashi bran (we store ours in a standard kitchen sprinkler to make it easy) and put on the lid tightly. That’s it.

Mission accomplished. Bokashi hour is fixed and it took all of, what, 60 seconds?