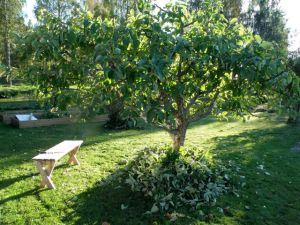 Actually this is not the really deep and meaningful rave it could be about dealing with our waste ourselves, cutting down what we throw out and dealing with it as close to home as possible.

Although it does go to the heart of the matter in its way. It’s about my apple tree. How we trimmed it back hard and good in the weekend. And every last bit got used. Right there on the spot.

For a start, the deer had already eaten most of the apples. Which is ok, because they look nicer than they taste (the apples I mean, not the deer). But the branches that were growing every which way came off in a thick pile on the ground.

Should we compost them? Mulch them? Stack them on the too-hard pile for the winter?

Easiest solution was just to chop them into big bits, arm-length or so, and just pile them up under the tree itself. Soon enough they’ll sag down into a carpet, and in a month or two they’ll freeze and be covered in snow. Nature will do its work there over the winter and what I’m expecting in the spring is a nice patch of healthy soil under the apple tree where we can plant a few flowers for the summer. The big branches that are left will be easy to pick away, best of all is the fantastic work that the small guys do for us, all the time, while we’re not even looking. The microbes, the worms, the hedgehogs too for all we know.

I think it’s neat. Feels right, gives the soil a lift, the worms a home and for a rather lazy gardener such as myself its definitely the way to go.

This must be a million more ideas for local recycling right under our nose. Got any to share?

(Oh, and obviously I should have mentioned, I scattered a couple of handfuls of Bokashi bran over the leaves to help get the microbes get going on their task. If I get some spare Bokashi juice in the next couple of weeks I’ll toss that on too.)

One thought on “Local recycling at best — right under the apple tree!”